As we all wait and watch as the 2020-21 hockey season passes us by, we thought that maybe a contest could help cheer us up a bit. So here it  is:

The story or artwork can be about anything HOCKEY. A memory, a story, a poem, a drawing about your favourite team….anything creative!

Open to all HWI members and all ages, kids to adults.

We will select the best and draw the winner from that group. Spread the word! More contest to follow.

Ideas and examples and samples of entries may be added below…so check back for inspiration!

Puckstruck is an undertaking of Stephen Smith’s. His stories about five-dollar bills and boy travel writers have appeared in Geist and McSweeney’s. Like legendary Montreal Canadiens’ winger Bob Gainey, he was born in Peterborough, Ontario, and took to the ice at an early age, where he soon failed to follow Gainey to the NHL. While his enthusiasm was never in doubt — a coach once worried that with his headlong approach to the game, he was going to injure himself — he won none of the Stanley Cups that Gainey collected, and no Conn Smythe trophies, not a one.

An award-winning reporter and sometime columnist, he sometimes refers to himself in the third-person. He has contributed to The New York Times, The Globe and Mail, Canadian Geographic, The Toronto Star, the Montreal Gazette, The Walrus, The Literary Review of Canada, The Kingston Whig-Standard, The Hockey News, Saturday Night, Quill & Quire, Outside, and The New York Times Magazine. He has a book, too, also called Puckstruck. It’s his first. He shoots left. 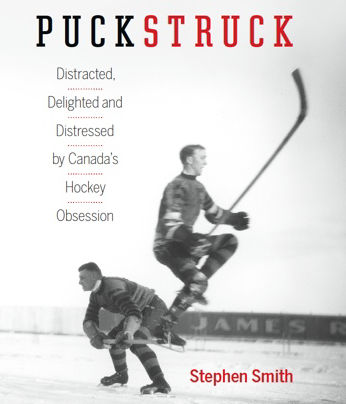 previous
Holiday Message from the Prez.
next
PRESIDENT'S UPDATE - 2020-21 SEASON / REFUND POLICY
TAKE ME THERE!