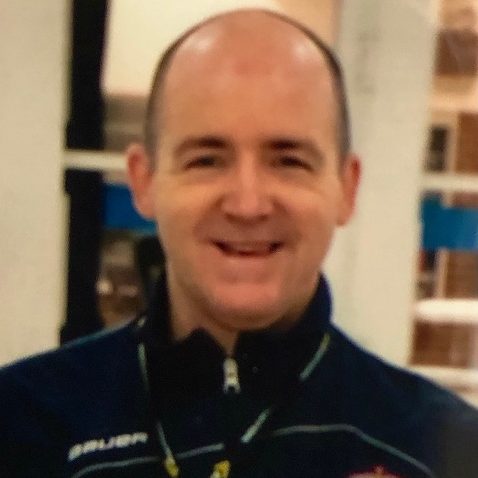 A: Volunteer, coach, and sometimes President.

Q: How long have you been involved in hockey, and how did you get started?
A: I started playing at age 5.
I started loving the Montreal Canadiens at age 6.
Our first hockey kid started playing in 2008.

And this year, we have 3 kids playing with Hockey West Island.

Q: What’s your advice for new-to-hockey parents?
A: Yell at refs and opponents and curse-out teammates who don’t pass to your child.

..Just kidding. Don’t do any of that. Hockey is a great sport. Let it happen.

Q: What’s a favourite hockey season memory?
A: Our Pee Wee B team edging out Christine’s [VP Admin] team by 1 point for the season championship.

A: The ability to recognize how lucky they are to be part of a team.

Q: What’s the worst job you’ve ever had, and what did you learn from it?
A: Bus-boy at the Bar B Barn. I learned how to get a hernia from lifting 40-pound garbage bags into the dumpster. 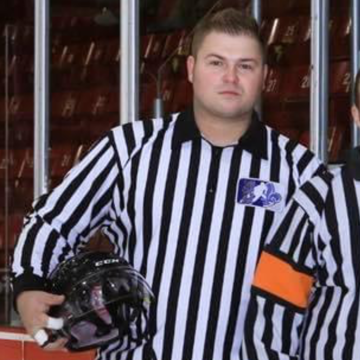 A: Referee in Chief (2nd year)

Q: How long have you been involved in hockey, and how did you get started?

A: I have been involved in hockey for most of my life. I started to referee when I was 13, and my Dad had a huge influence on me- he was Referee in Chief for North Shore when I was young and reffed my first game with me. Hockey is in my blood as my Dad played competitively up to the OHL and my uncle won 2 Stanley Cups with the Flyers in the ’70s. I played for John Rennie and was drafted in the QMJHL but did the US Prep School and University route. Upon coming back to Montreal, I still wanted to be involved in the game, so I started reffing again, this time with West Island in 2011 as a Pointe-Claire resident. Last year, I was asked to take over as Referee in Chief from Daniel Nantel, who built the program into what it is today. I continue to referee and supervise at the Regional level, and also formerly reffed at the Provincial level. I am very passionate about developing young officials & ensuring that HWI has one of the top reputations as a referee staff in all of Lac St-Louis.

A: Hockey is such an amazing sport as it teaches us about ourselves while providing invaluable life lessons. As referees, our job is to keep the game safe and keep the game fair. Often times we are seen as public enemy number one, but we are referees because we love the game and want to establish a safe and fair playing environment for the kids- at the end of the day, it’s all about them! It is a thankless job and we do our best every game. Everyone should try it once!!

A: I played NCAA lacrosse in college and would highly recommend the sport to any hockey player. I also enjoy watching hockey, lacrosse, football, and rugby.

Q: What’s a favorite hockey season memory?
A: I have two. My first year of competitive hockey, in Midget Espoir. It was the first year the league existed (’02-’03), and the hockey was played a little “differently” back then. It taught me discipline and to not give up while playing to my strengths.

Also, my senior year at US Prep School. Meeting players from all over Canada, the USA and Europe while going through boarding school was life-changing. I captained the team and it was the most fun I have ever had; we had such a close group of guys.

A: I earned my Masters Degree from McGill in History, but I’ve worked in recruitment and sales for an engineering services company for the past 8 years- we never know where life will take us! I enjoy playing guitar, spending time with my girlfriend and her kids, and am an avid ball hockey player.

A: Trustworthiness. As a player, a referee or in any other capacity in life, trust in your teammates and their trust in you is critical in order to achieve success.

Q: What’s the worst job you’ve ever had, and what did you learn from it?
A: I worked in sales for a start-up software company at one point, and there was no accountability in their work culture. You could just show up and go through the motions without making a sale every week and it would be ok. The company was not succeeding and it is night and day when compared to where I work now. It taught me that accountability and honoring your promises/commitments are important, and that you can only succeed with a strong support system in place. These principles are also important to our refereeing staff at HWI. 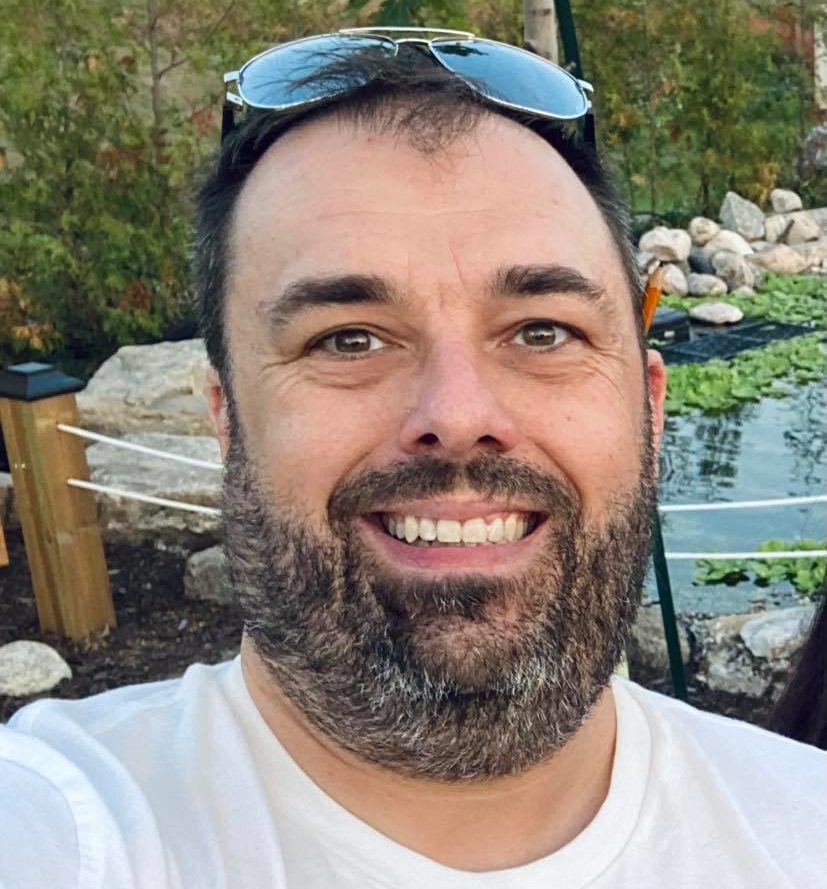 A: I am a volunteer! Convenor for both M15 Bantam and M13 Peewee, Secretary of HWI Executive, and Interim head scorekeeper. Also first and foremost a hockey dad.

Q: How long have you been involved in hockey, and how did you get started?

A: 8 years now, started when our son wanted to try Pre-Novice. Grew up playing other sports but have always been a hockey fan.

A: While we all have dreams for our players to be superstars one day, what’s important is that they are learning and having fun! Support that and become involved! HWI could not do what it does without the support of parents!

A: Softball, golf, and squash

A: Going back to novice B in 2016-17. While we had a lot of success in games, tournaments, regionals, etc, what was the most amazing thing was the bond and chemistry there was between players AND between parents and siblings. We even had a cheering squad made up of big and little siblings, and friendships made that have stood to this day.

A: I keep busy in IT Portfolio Management, being a dad to two great kids, husband to an amazing wife, and servant to 3 cats.

A: Having full confidence in one another.

Q: What’s the worst job you’ve ever had, and what did you learn from it?
A: Doing Pizza delivery – I learned that my school teachers were great tippers! 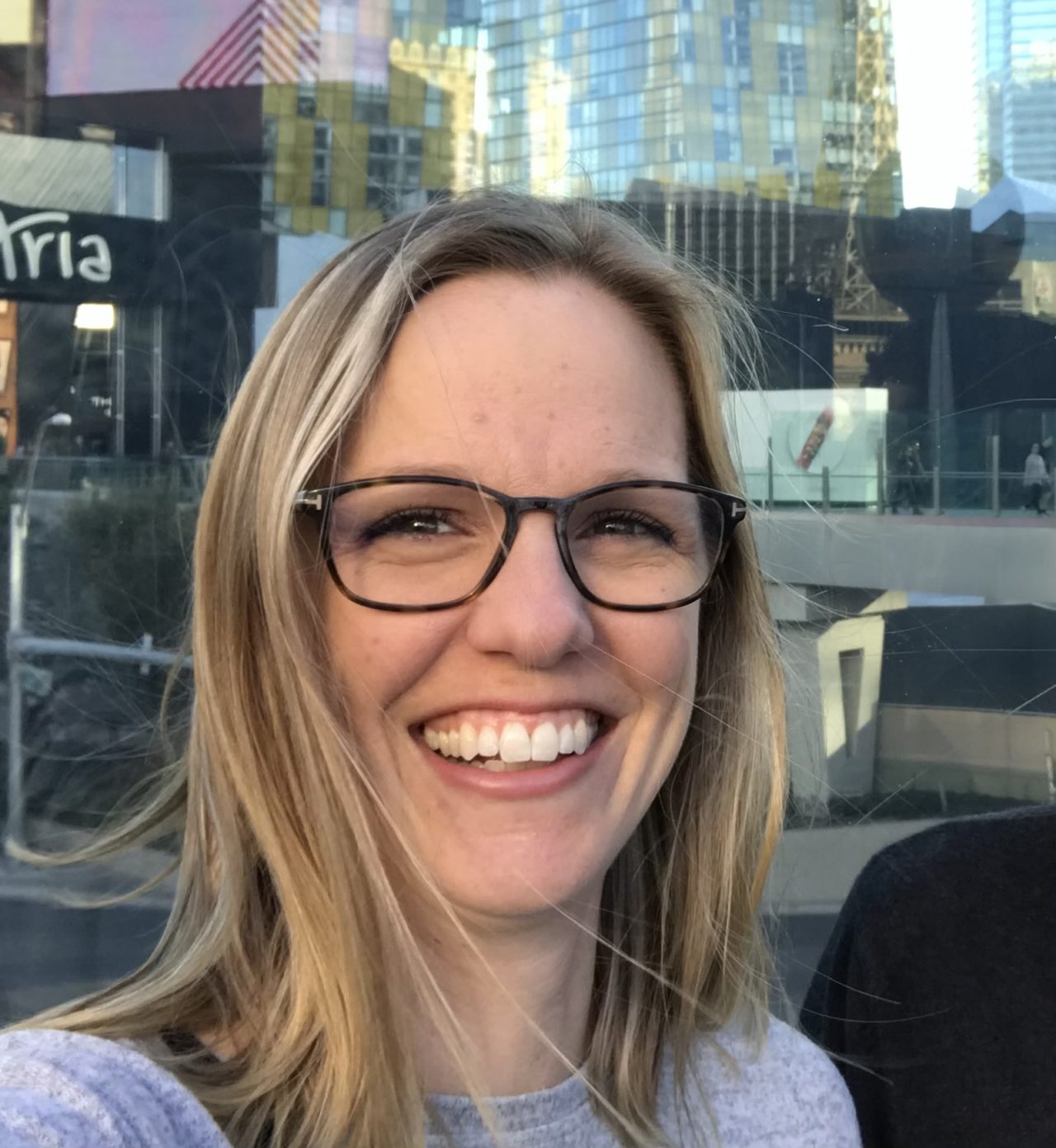 Q: What is your role at HWI?
A: M9 Convenor – otherwise known as the person who sends lots of emails in the hopes of someone…. Anyone… reading them.
Q: How long have you been involved in hockey, and how did you get started?

A: I am relatively new to the hockey world. After months of daily nagging and begging by my then 5 year old to please let him play hockey and failed attempts at trying to convince him to play a sport that would allow us to have a life outside of an arena, we conceded. We signed him up for Pre-Novice and he was the happiest kid in the world. Even at 6am in the dead of winter, he was (and remains) pumped to skate up and go. Turns out, hockey is fun, arenas aren’t that bad and hockey families are actually cool. And sitting idle isn’t my strength – so I became team manager and had a great time. Seeing the innocence in my eyes and capitalizing on my hockey naivety, Dan Taza brilliantly convinced me to take on the role of convenor. It’s easy, he said…. just a couple of emails …. he promised. And here I am, glued to my google docs and sheets and hoping to make sure every single Novice kid has a wonderful season.

Q: Other than hockey, what sports do you enjoy playing or watching?
A: There are sports other than hockey? In our house, all sports are fair game. My personal favourite on TV is Hockey and the Olympics. I like to think about playing sports but my execution of said playing is limited by my incredible lack of sporting ability (my sibling got all the sporting abilities). I do love yoga and running. My real sport is getting my kids to all their sport activities (hockey, soccer, tennis, swimming, gymnastics…). Does that count?
Q: What’s a favourite hockey season memory?
A: Benji’s very first hockey tournament at the DDO MAGHFEST when he was a Penguin. The kids had such a great time and it was so fun to see the little ones play their heart outs in what was their version of the Stanley Cup Finals

Q: When you’re not at the rink, what do you do in your “real” life? (For fun, work, or both)
A: Help people get stuff done? I pressed pause on my life in commercial real estate to focus on family. So now I work part-time, do a bunch of random fun stuff, try to fit in too much into my day and make sure that I lend a hand to those who need. And constantly wonder what I want to do when I grow up.
Q: What’s a quality that great teammates possess?
A: The ability to come together in victory and defeat.
Q: What’s the worst job you’ve ever had, and what did you learn from it?
A: Oh my word ….the one time when I was 18 and worked the elections. That was the LONGEST DAY OF MY LIFE. I learnt that I can’t sit still for hours on end and do the same thing over and over. But then I got my cheque and realized that no job is a bad job.
TAKE ME THERE!